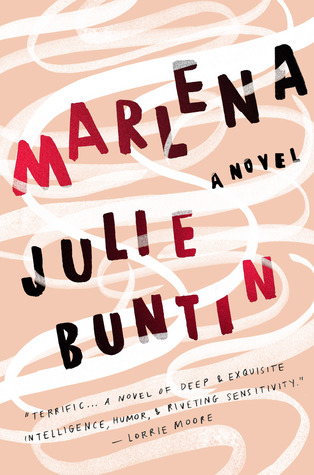 Everything about fifteen-year-old Cat’s new town in rural Michigan is lonely and off-kilter, until she meets her neighbor, the manic, beautiful, pill-popping Marlena. Cat, inexperienced and desperate for connection, is quickly lured into Marlena’s orbit by little more than an arched eyebrow and a shake of white-blond hair. As the two girls turn the untamed landscape of their desolate small town into a kind of playground, Cat catalogues a litany of firsts—first drink, first cigarette, first kiss—while Marlena’s habits harden and calcify. Within the year, Marlena is dead, drowned in six inches of icy water in the woods nearby. Now, decades later, when a ghost from that pivotal year surfaces unexpectedly, Cat must try to forgive herself and move on, even as the memory of Marlena keeps her tangled in the past.

Alive with an urgent, unshakable tenderness, Julie Buntin’s Marlena is an unforgettable look at the people who shape us beyond reason and the ways it might be possible to pull oneself back from the brink. (Goodreads synopsis)

Marlena is a haunting and captivating tale of teenage friendship and how all consuming it can be. We follow Cat who has just moved to a poor town in northern Michigan and is immediately enthralled with her new neighbor Marlena. Their friendship is fast and dangerous. Cat is immedately wrapped in in Marlena’s world of drugs and mystery. WE learn at the beginning of the book that Marleana is dead. The story is told from an adult Cat’s perspective as she recounts how much of an influence Marlena had on her life.

Julie Buntin’s writing style was gorgeous. Sentence for sentence the prose had me immersed in the the story. This is her debut and I will definitely be reading anything else that she writes. Even though the story of toxic girl friendships has been told often, there was a newness to this story that kept me turning the pages. Each plot point that was brought up throughout the story was intentional and fleshed out.

The character of Marlena could have went in the “manic, pixie, dreamgirl” territory, however there was an edge to her that made you want to understand her motivations for her behavior. Cat is a somewhat unreliable narrator and admittedly so in the text. There is discussion on how we remember things based on how we want to remember them that runs throughout the book. At the beginning of the book, I found both Marlena and Cat unlikable but that did not deter me from wanting to understand their motivations.

Overall, I do recommend this book to people who appreciate a quiet character study with a mysterious twist. This could be a good bridge book into adult fiction for older YA readers in my opinion. Even though this is not a plot heavy book, as YA tends to be, I think that this is a good book.

Follow me on social media to see what I’m currently reading.